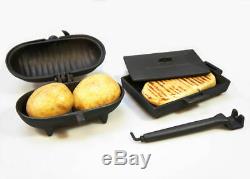 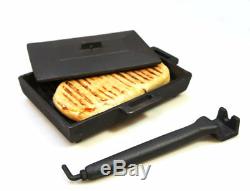 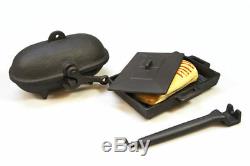 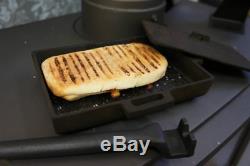 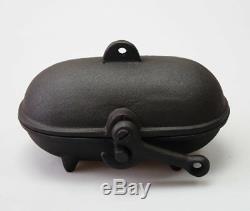 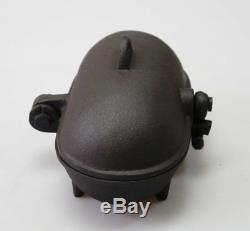 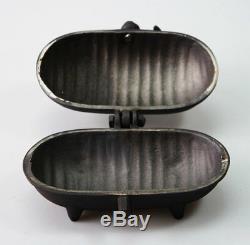 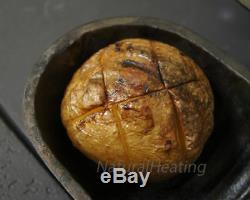 Cast Iron Std Potato Cooker and Cast Iron Panini Cooker SET For use on top of and inside wood burning and multi fuel stoves and in open fires! A duo pack - consisting of one of our fabulous standard size cast iron potato cookers and one of our new Hellfire cast iron panini cooker / bacon presses with removable handle.

The perfect Christmas gift for a friend or relative with a wood burning / multi fuel stove. Quirky, unusual and very very useful. Our cast iron cookware for use on top of and also inside of wood burners / multi fuel stoves can also be used inside normal ovens and on gas hobs. It's quality cast iron, made to last.

Easily cared for, just lightly oil to protect the surface, as you would a wok before use and after cleaning. Also worth looking at our seasoning paste recipe for applying a non-stick coating. The standard size cast iron baked potato cooker is small enough to fit on top of practically any stove, yet big enough to hold up to two medium (250g / fist sized) potatoes or one gigantic spud.

The more space you give them, the better they cook. It's not like wrapping a potato in foil and chucking it in the fire.... (where you end up with something charred on the outside and hard in the middle). If you have ever tried cooking a potato on top of a stove without our pod, they tend to ooze a bit of starch and make a mess of the paint on top of the unit - as well as only cooking from one side.

Our pod is not in full contact with the top of your stove however, and as your potato is totally encased in cast iron, this creates a lovely, even bake without the mess. Also ideal for cooking roast chestnuts.

On top of that, it looks fantastic too. With potatoes, lightly oil before putting in the pot.

Putting some slits in the potato is optional, but does make them cook a bit quicker. This one of the two in the top photo one cooked my colleague had already scoffed the other! Putting the empty potato cooker inside the stove to heat up for 5 mins or so before putting potatoes inside makes a big difference to cooking time. Sometimes we zap potatoes in the microwave for a couple of mins to give them a head start if we want them done faster.

You can also use both of these items on a gas hob or in a conventional household oven PANINI COOKER INSTRUCTIONS. This is a cast iron skillet style cooker with removable handle and two lifting points.

Designed with paninis and bacon in mind, but you can cook anything in it inside a wood burning stove - from steaks to burgers, vegetables, fish etc. The inside base of the cooker and underside of the lid are lightly ribbed to show some lovely light grill markings on your cooked food. The included tool is double ended. One end is used to lift the cooker out of the fire, and the other end is for lifting the lid and applying pressure. Cast iron is the best, traditional cookware you will ever find.

Build up your seasoning for a natural non stick coating. Simply oil lightly like a wok before and after use which protects and seals the metal. To cook a panini, put the set inside your wood burning / multi fuel stove directly on top of burning fuel (at a medium burn rate). It'll take 5 > 10 minutes to get REALLY hot.

Remove the unit from the stove with the tool. Remove lid and insert panini. Replace lid and apply light pressure using the tool. Takes 1 > 2 minutes. If your cast iron panini cooker is TOO hot, leave for approx 60 seconds on the hearth before putting panini in.

If not hot enough, you can put it back inside the stove for 30 seconds or so with panini inside to finish off. This item can also be used for cooking chicken fillets, burgers, fish and many other things when placed on top of the Hellfire Grill base (see our other listings - the grill base is NOT included with the panini cooker) with glowing embers underneath and fire to the side. This allows control of cooking rate and heat for cooking burgers, meat etc. NOTE - Your cast iron baked potato cooker and panini cooker require seasoning before first use. For use on top of wood burning / multi fuel stoves : use a little sunflower / vegetable oil on some kitchen roll and lightly oil inside only.

Sit the BPC on top of your stove for at least 2 evenings when the stove is being used before coking for the first time. This is to allow the BPC to get hot enough to bake the external stove paint on to the pot (do be aware the paint may smell as it cures - just as it does with a new stove) For use inside an open fire : start with building a small fire.

Put the BPC in the fire for approx 15 mins. Remove and allow to cool.

Do not use salt on your BP during cooking in the pod as this will encourage additional draw of moisture and may encourage the BPC to surface rust. The baked potato cooker should never need "washed" - but wipe over if required and lightly oil inside with a sunflower / vegetable oil on kitchen roll (as you would a wok) to protect and prevent rust. PLEASE NOTE - BAKED POTATO COOKERS ARE NOT SUITABLE FOR USE ON BOILER STOVES OR STOVES WITH CONVECTION TOPS, AS SURFACE OF THESE UNITS DO NOT GET HOT ENOUGH. This item will be sent by courier and will require a signature. Items must arrive back in new, resalable condition to the address below within 14 days.

It is your responsibility to obtain a certificate of posting for the return from the post office, otherwise you may not be able to claim the post office for it should it not arrive. The item "Std Cast Iron Baked Potato Cooker & Panini Cooker Bacon Press for Wood Stoves" is in sale since Thursday, October 12, 2017. This item is in the category "Home, Furniture & DIY\Fireplaces & Accessories\Heating Stoves".

The seller is "naturalheating" and is located in Attleborough / Norfolk & Hamilton / Scotland. This item can be shipped to United Kingdom.